Superintendent Carl Davis has been in ministry for over 35 years. He is a native of Memphis, Tennessee and has been pastoring at New Life Tabernacle Church, in Houston, Texas since 1997. As the Lord has led, Pastor Davis has been blessed to build three sanctuaries in seven years, so as to accommodate membership growth.

He has served in many capacities including: Texas South Central Jurisdiction; District Sunday School Superintendent of the Northwest Houston District; State Chaplain; State Sunday School Superintendent; Task Force for TRIAD; he is the presiding Superintendent of the Acres Homes District; a member of the Houston Minister’s Against Crime Organization in which he served as Public Relations Director; he also served on the Mayor’s Minister’s Advisory Council for the City of Houston, and as an Administrative Assistant in the Texas South Central Jurisdiction.

At the age of 12, Pastor Davis invited Christ into his life under the pastorate of his father, Superintendent Sherman Davis, Jr. of Tacoma, Washington. At this time he was a member of Lakeview Gardens Church of God in Christ, where he served as one of the church musicians.

It was under his father’s leadership that Pastor Davis acknowledged his call to the ministry in 1974. After a three day consecration in June, 1974 he preached his first sermon. For two years, Pastor Davis trained as a licensed minister of the gospel. He was ordained in July of 1976, under the leadership of the Presiding Prelate, Bishop J.O. Patterson, Sr. Since that day, Pastor Davis has served faithfully under different pastors throughout the country, before settling in Houston, Texas which he now calls home.

Pastor Davis attended Memphis State University, majoring in Business Administration, with an emphasis on Business Management. Pastor Davis received an Honorary Doctor of Theology degree from the North Carolina College of Theology and an Honorary Doctor of Divinity degree from the Sacramento Theological Seminary and Bible College. He has spent 25 years in Corporate America thriving in sales and marketing. As an Area Director for a Houston Telecommunication Firm, his responsibilities included: hiring, training, developing, and motivating sales marketing teams for the Houston area.

Pastor Davis has been married for over 30 years to the lovely Harolyn Davis and they are the proud parents of two children. He is the son of the late Superintendent Sherman Davis, Jr. and Jurisdictional Supervisor Curlie C. Davis of Tacoma, Washington. 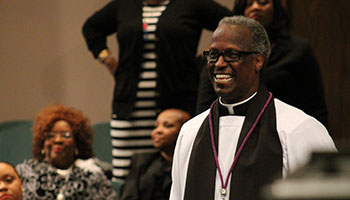 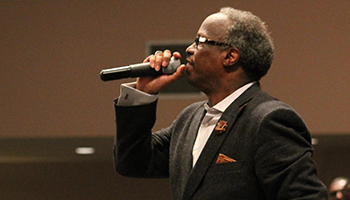